15 key places to visit in Valencia 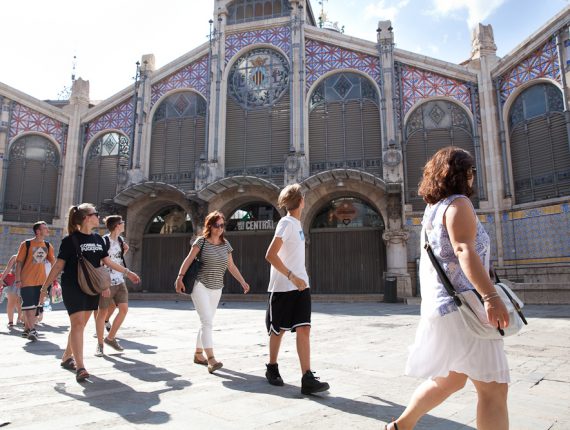 Valencia is the most populated city of Spain, after Madrid and Barcelona. Discover the characteristic places of this famous city, known as the capital of Turia.

The town hall square is one of the most important and central squares of Valencia. Its circular fountain and flower stalls are characteristic of the square, surrounding around a space where the traditional mascletàs are celebrated every year during the festivity of ‘Fallas’. Most of the surrounding buildings were constructed during the first half of the 20th century. Since 2015, last sundays of each month, the square remains completely pedestrian between 10 and 20 hours. In addition, it is the meeting point of many bus lines.

Micalet tower is the bell tower of gothic style of the Cathedral of Valencia. It is known as ‘El Miguelete’ or ‘Torre del Micalet’, and is located in the ‘Plaza de la Reina’. It has a total of 50.85 meters in height, and its access is by a spiral staircase with 207 steps. You can visit every day of the year by purchasing the ticket. From its terrace you can enjoy wonderful views of the city of Valencia. It is one of the most visited monuments of the city.

The ‘Mercado Central’ of Valencia is one of the jewels of modernism in the city. Its construction started in 1910 and ended in 1928. It is located in the Market Square, next to the ‘Lonja de la Seda’. This spectacular bazaar has 300 stalls where all kinds of food are sold: fish, seafood, fruits, spices, sweets, meats and sausages. Its history, tradition and architecture make this place one of the most beautiful buildings in the city: the colour of its windows, the symbolic ornamentation, the luminosity and its allegorical steel architecture reflect a richness and beauty inspired by the same garden. It is crowned as the largest fresh produce market in Europe.

The ‘Torres de Serranos’ –or Serranos gate– is one of the two fortified gates of the medieval wall of Valencia that gave access to the city and that, together with the Quart towers, still remain standing. Two polygonal towers joined by a central body where the door opens in the shape of a semi-circular arch form it. From 1586, these towers were a prison for nobles and knights. At present, they host various important events in the city, such as the Crida, which welcomes the festivity of the Fallas. They also serve as a museum. These imposing towers have been declared a Monument of Historical Artistic Interest. From the top, the views of the city of Valencia are spectacular.

The ‘Estación del Norte’ is the main railway station in the city of Valencia. It is a terminal station of monumental character and Valencian modernist style inaugurated in 1917. In 1983 it was catalogued as an Asset of Cultural interest. It is located in the centre of the city and just 200 meters from the town hall.

Bombas Gens building was built in 1930 to give life to a hydraulic pump factory. At that time the factory was an important industry in the neighbourhood of Marchalenes. The cessation of its activity at the end of the 20th century left the space totally abandoned, with episodes of fires and landslides. Although several attempts at protection have been made, it was not until last summer of 2017 that ‘Fundación Per Amor a l’Art’ restored this art decó valencian building, located halfway between Burjassot Avenue and Reus Street, making it the centre of Art that is currently. Bombas Gens is a centre of itinerant cultural activities, a refuge of the Civil War, a medieval winery and even restaurant of one of the best Valencian chefs at international level, Ricard Camarena.

The Valencian Institute of a Modern Art (IVAM) is a valencian museum that aims to research and disseminate Modern and Contemporary Art. Its program of activities includes the exhibition of its artistic collections, the organization of temporary exhibitions, the edition of catalogues and the celebration of conferences, courses, workshops and concerts related to current art. It is located on Guillem de Castro Street, in the Ciutat Vella area, next to the Bridge of Arts, which crosses the Turia River Park.

In the neighbourhood of Monteolivete and located in a former convent, the Fallas Museum hosts the collection of ninots indultats of the Fallas, which are saved from burning by popular vote that takes place every year at the Exhibition of Ninot. In addition to ninots, you can see the photographs of the best Fallas of each year and the winning posters of the annual contest of Fallas.

The Jardines del Real, also called ‘Parque de Viveros’, is an urban public park. It is considered the most emblematic garden of the city for its history, cultural, ecological and landscape value, extension and botanical diversity. These gardens currently house the Museum of Natural Sciences, with a large collection of fossils, one of the entrances to the Museum of Fine Arts, and archaeological remains. Your entry is free.

Gulliver Park is considered done of the most emblematic parks of the city. Located in the Garden of the Turia of Valencia, almost at the height of the City of Arts and Sciences, its main attraction is the monumental sculpture of Gulliver of 70 meters, which can be accessed through stairs, ramps and slides. The scene represents the moment in which this fictional character, created by the writer Jonathan Swift, arrives in the country of Lilliput and he is attacked by the lilliputians. The figure was made to scale with the aim of visitors looking like inhabitants of this city walking through the body of the protagonist of the famous novel ‘The Travels of Gulliver’ (1726).

The stadium of Mestalla, ‘Camp del València’ or ‘El Mestalla’ is a football stadium owned by the Valencia Football Club, located in the Mestalla neighbourhood of the city of Valencia, between the avenue of Suecia and the avenue of Aragon. It must be its name to the historic Mestalla ditch that passes next to the stadium’s southern step. It was inaugurated in 1923, and has a capacity for 55.000 spectators. It is the oldest stadium in the First Division.

The Cabecera Park of the city of Valencia is located on the bed of the Turia River and completes the northwest area of the city combining the concepts of nature and metropolis. It is the leafiest area of the river Turia and you can access the Bioparc through it. With more tan 330,000 square meters of extension, this park hosts a wide variety of activities related to culture, leisure and sports. It is divided into four zones: ‘Bosque de la Ribera’, ‘Plataforma Mirador’, ‘Bioparc’ and ‘Parque de Atracciones’.

The ‘Edificio del Reloj’ is an architectural emblem of the city of Valencia, the most symbolic building of the port of Valencia. This tower, of French inspiration and great decorative wealth, served as an important maritime entrance to the city. It is currently the headquarters of the Port Authority of Valencia. Also, it is sometimes used to host events of a business and professional nature.

The City of Arts and Sciences is a great recreational centre for scientific and cultural dissemination that began in 1996 and was designed by architect Santiago Calatrava. It is conceived as a city within a city. It is surrounded by attractive swimming pools and is made up of a set of six areas located on the bed of the Turia river in Valencia: the Hemisfèric, a cinema and a planetarium; the Umbracle, a garden for walking and a nightclub; the Palau de les Arts Reina Sofia, an opera house; the Prince Felipe Science Museum, a museum of applied science; the Oceanogràfic, an outdoor maritime park; and the Agora, a multifunctional space for the celebration of events.

‘Las Naves’ is a municipal space that is defined as a centre of creation. Located in the street of Juan Verdeguer, very close to the Marina of Valencia, its facilities have 5000 square meters and are the result of the restoration of an old grain warehouse. At present, ‘Las Naves’ has the latest technology with cameras, sets, rehearsal rooms, photography laboratory or library equipped with computers. It also takes place for leisure with a Schedule of events that is a constantly renewed. Also, it is the headquarters of the ADCV, the Valencian Community Designers Association. This non-profit foundation promotes urban innovation with a commitment to people.